Several months ago I was reading posts in the blogsphere and one in particular caught my eye.  Clicked on the link and looked at some paintings then learned a fellow blogger might be attending the same gala I was at the beginning of July. 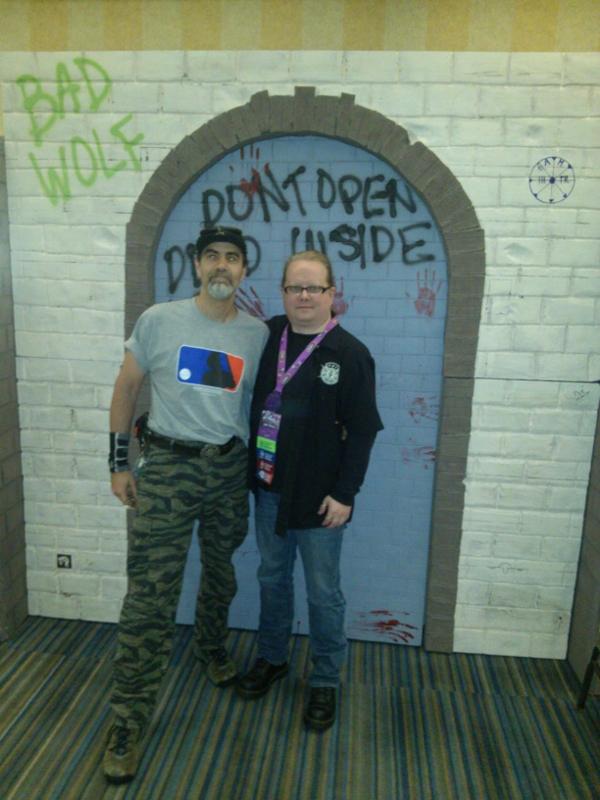 JJ typing, it started out innocently enough.  Jim made comment about convergence over July 4th weekend in one of his blog posts.  Asked him if he was referring to CONvergence in Bloomington, MN.  He said yes.  Boy was I excited.

Jim and I emailed back and forth to see if dinner would be possible.  We set up a time that might work.  We'd talk more when he arrived at CON.  As he said he'll be doing some work in the dealers room.  Wow!, something magical happened.  I was one of the co-heads, volunteer, in charge of the dealers room.  We were definitely going to see each other.

My other co-head, good friend and brother Bryan, was in the room also.  Told him the story and that he's going to be working one of the tables in the dealers room.  Not an hour later strolling through the doors was James Wappel.  A living legend, someone who I've been reading his blog for over a year was walking before my very eyes.  Immediately introduced myself.  He said he was looking all around wondering where I was and if he'd see me.  Showed him where his tables were located in the room and instantly went into fan-boy mode.  Bryan was sitting nearby.  Started hoping up and down like an excited little girl, covering my mouth, tremebling with awe by being in the very presence of James Wappel.  Must have introduced him to Bryan like five times.  Was in constant euphoria just by being near him.  Suddenly realized what I must have looked like and knocked that behaviour off.  Apologized for my excitement and said that I was really looking forward to having dinner with him and asking him tons of questions.  Jim chatted with his partner Cathy about dinner and plans were set.  We'd do TGI Friday's across the parking lot around 6:45pm.  Told him the dealers room could keep me a little bit longer, because things at conventions never go according to anyone's time table.  If you've volunteered at a con you know exactly what that means.

Bryan told me later that he warned Jim that I might be going all fan-boy on him.  Bryan said Jim just nodded his head and said "Yeah."

It was getting close to 6:45 and time for dinner with Cathy and Jim.  Of course ended up locking up the dealers room later than I wanted and rushed to Fridays.  Fortunately there was Cathy and Jim going down the escalator.  Quickly caught up to them and started chatting across the parking lot.

A table of three it was.  While I'll admit to being selfish wanting to have dinner alone with Jim, it was awesome that Cathy joined us.  They were an excellent couple to break bread with.  Topic of conversation at the table, painting. Not one word about anything else.  It was fantastic.  Almost two and half hours of asking Cathy and Jim questions about painting, techniques, what they do, how they do it and tips for other painters.  Planned ahead and brought a piece of paper and pen.  Remembered what happened with Andrew at last Renegade.  The classroom was set and I ever the eager student with large ears and empty pitcher ready to be filled with the painting wisdom from Jim.  Didn't expect to also be filled with the painting wisdom of Cathy too.  This was great.

Twice during the conversation one of the servers Julian stopped by.  He's one of the great servers at Fridays that serves the CON group after one of the meetings.  I was rarely speaking not daring to cut off the infinite wisdom of either Cathy or Jim.  However Julian seemed more than ready to say something obligatory.  Trying to add onto what Jim said.  From what Julian was saying you can tell he wasn't a painter and just wanted to be part of the conversation.  It didn't take him long to realize that dinner was about learning things from Cathy and Jim.  He ended up leaving quickly and I went back to figuring out their painting world.

Seeing Jim in person was a bit surprising.  Thought he would be much older, found him to be surprisingly youthful.  Sharp eyes, which always seemed to be looking for something unknown.  His style of dress is carefully developed by someone who clearly knows themself.  He has to be the only person I've ever met that is truly comfortable in their own skin.  There's an air about his style that is cut from his experiences that kind of boarders on uncomfortableness, because he is so comfortable with himself.  He puts people at ease with skill unseen before.  Never saw someone listen to others the way he does.  There's something about the tilt of his head, the lean of his ear and his eyes creating the words you say with his eye brows pulled together letting you know his complete concentration is on you.  When you're speaking you sort of got the feeling that you're the centre of his world.  Which, if you can imagine having someone's talent like Jim intently listening to you, can be a bit scary.  There's a kind of craziness or madness to Jim that frankly is disarming.  Some would use words like nerd, dork or geek.  I'd say he's transcended beyond any of those nouns.  Dare I say fanatical.  His fanaticism is intoxicating.  His answers to questions are so easy to follow and depth of the explanation is astounding.  One could consider him to be a bodhissatva.  He's truly enlightened and instead of taking his place outside this world he has chosen to stay and help others to learn the way of enlightenment.  Another way of putting it, he is so complex and such a rounded individual it is simple.  Very much the way a worn and experienced black belt frays with age thus becoming white again.

During the course of our dinner I asked many questions.  Only told one story.  Rest of the evening was listening to Cathy and Jim talk about painting.  Here are a several things I wrote down during the dinner.  Mostly to remember them for future use.


We finished our meal long ago and continued chatting about painting and techniques.  Jim even had some advice and stories about commission painting for companies.  Those are his stories to tell.  Some funny, frustrating and eye opening stuff in my opinion.  Walking across the parking lot back to the Doubletree Cathy, Jim and I parted ways.  They were in another hotel for CONvergence.  Had a great time chatting with him before the dealers room opened and after it closed during the rest of CON.  Even spoke with him several times when I was making my rounds.  He said he participated in a sculpting class in the garden court Sat morning and learned about colour shapers and made a pretty cool dinosaur, which he posted on his blog.  Cathy mentioned that the dinner was fun and it was great talking about painting with another painter and that she had a blast.  One funny thing they mentioned at dinner is people at conventions like Adepticon will play 'Guess the Wappel' whether Cathy or Jim painted the army, because their painting style is so similar.  Jim mentioned he'd watch Cathy paint and pick up a lot of techniques from her and how she did something.  A lot of people who play the game think that Cathy's Deathwing are painting by Jim and Jim's army is painted by Cathy.  One way they told me you can tell who painted what is by the colours they use.  If I remember correctly Cathy tends to use a lot of greens, Jim a lot of purples and blues.

Hope this has a been an entertaining read.  I emailed this to Jim for his approval.  He enjoyed the read and said that I helped make it a memorable weekend.

In his reply he mentioned he may have forgot to talk about "painting DNA."  That is something he mentioned and I agreed.  As he said "painting DNA" is the passing down of painting techniques and passion from one person to another.  You can see the inspiration of artists and the evolution of the painting style.  I agreed and talked about it in different terms.  The information I provide will be a generation better because the person who used that information will learn what does and doesn't work for them.  They in turn will share that information with another.  Who will learn from the collected wisdom of those before and try it their way, and will share that growing information with someone that I'll never meet.

If you ever get the chance to have dinner with Cathy and Jim please do yourself a favour and do it.  They are some of the finest and best people I've ever met.  You'll learn a lot and have excellent company chatting with fellow artists.

Thank you, Cathy and Jim!

Email ThisBlogThis!Share to TwitterShare to FacebookShare to Pinterest
Tags: blogging