Getting closer to nailing down this Dire Avenger. 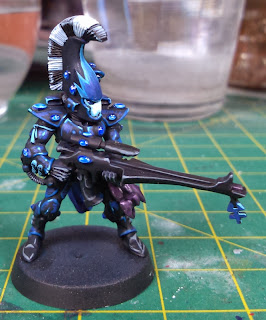 JJ painting, I'm with Henry South.  It is great being challenged and seeing you stepping up your game.  Getting closer to knowing Toni's eye.  Think one more little session and I'll have his eye down.

So far learning a client's eye is the most challenging and hardest thing I've done as a painter.  One can probably akin it to painting judge's eye.  One thing the Fri night gaming group talks about often is paint scores at tournaments. One former 40ker in my area would regularly get best painted even though his line highlighting was absurd.  It wasn't clean nor straight.  Sometimes it was down right sloppy with bulbs of paint part of the line highlighting.  It seemed that he would start and stop one line highlighting line that was maybe an eighth of an inch long several times.  As my good friend Bryan says "A lot of painting for 40k is based on animation like Gundamn and Robotech.  Bold line highlights are judged better because of those iconic images."  I tend to paint subtle highlights using shadows to define a model.  Which hasn't won me any best painted awards yet.  Because of several readers on this blog I've been reconsidering my view of line highlight, especially strong, line highlighting.  Of course I would be doing that just to get a trophy.  Which would make me a sell out on my painting style.  Then again I don't have to do strong line highlights on everything.  Only some models.

I feel after next session I'll have Toni's eye almost down.  He mentioned he wanted the armour to look more protective.  Which caused me to scratch my head quite a bit and reflect on how it was painted and compare it to examples of models he provided.  Put more body in the armour.  Not quite there.  I'm confident next attempt will nail it down. 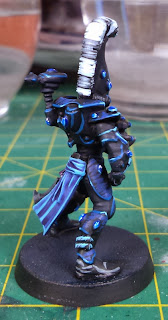 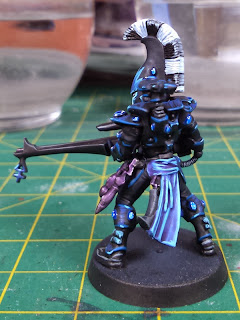 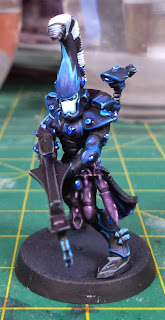 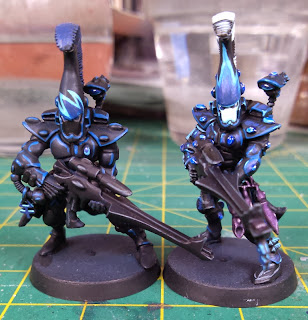 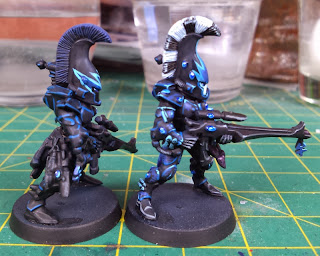 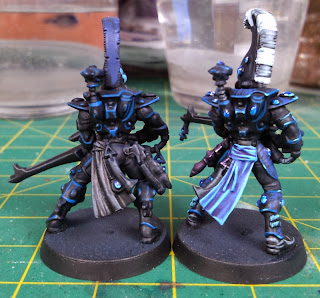