Finally a good session to get some work done.  Not that 6 hrs is any different than 5.  Just feels like I spent quality time at the table.  Also finally started and finished a squad in the time I was expecting.  4 hrs.

Had to prime these guys twice.  Guess I didn't all the spots the first time.  Primed with Prime Colour Uniform Grey from army painter.

Shawn only wants three colours on his Aspect Warriors.  Something I'm having a very hard time accomplishing.  Exarch has 7 colours.  Others have 6.  Getting down to that basic colour theme.  Which of course shows on the squad.

Plates are painted Golden Yellow.  Its not as sharp or bright.  Little muted.  Didn't want same colour as eyes, not that someone could actually tell.

Wanted to do a spider theme with these guys.  Wasn't sure exactly what.  Looked at pics of yellow spiders.  Figured brown would be nice.  Wanted to do some sort of design.  Didn't want the design to be involved.  Wanted in and out just like what Shawn wants.  Doesn't want a lot of time on these guys.

The spot(s) are Gore Red.  Turned out ok.  Again this isn't anywhere near top notch painting.

This turned out way better than I thought.  Grabbed a 2 size brush and dipped it in water.  Then dipped it in Bestial Brown and started applying.  Because the brown is watered down it allows the paint to be spread across the entire back without having to go back for my paint.  Plus the watered down brown allows the spot to be visible.  If I ever get a Tyranid army this is going to my basecoat for the army.  Effectively will be layering dots on the chitin.  Some spots will look like its underneath or inside the armour.  Then dots appearing ontop of them.  Similar to insects.

Close up of Exarch spots.  Unexpected bonus of a watered brown is that it melds with the colour underneath.  Cleaning up areas and changing the original colour. 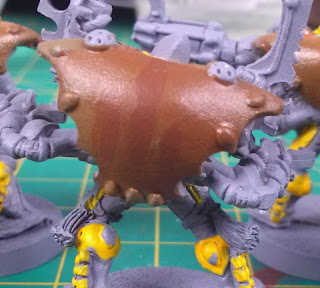 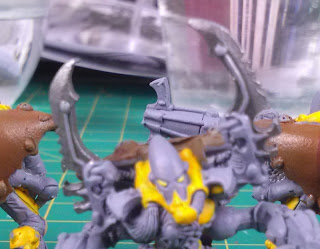 Abaddon Black for webbing.  Death Spinners and power cords.  Can't wait to get back to my Canoptek Spyders were I can start doing some detail again.  Til then I'll challenge myself where I can.  Like watered down brown stuff I just did. 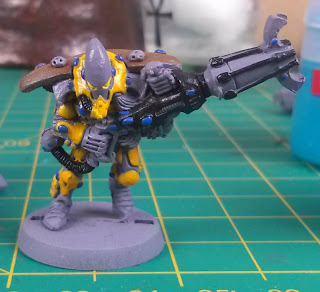 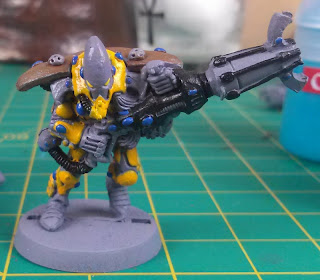